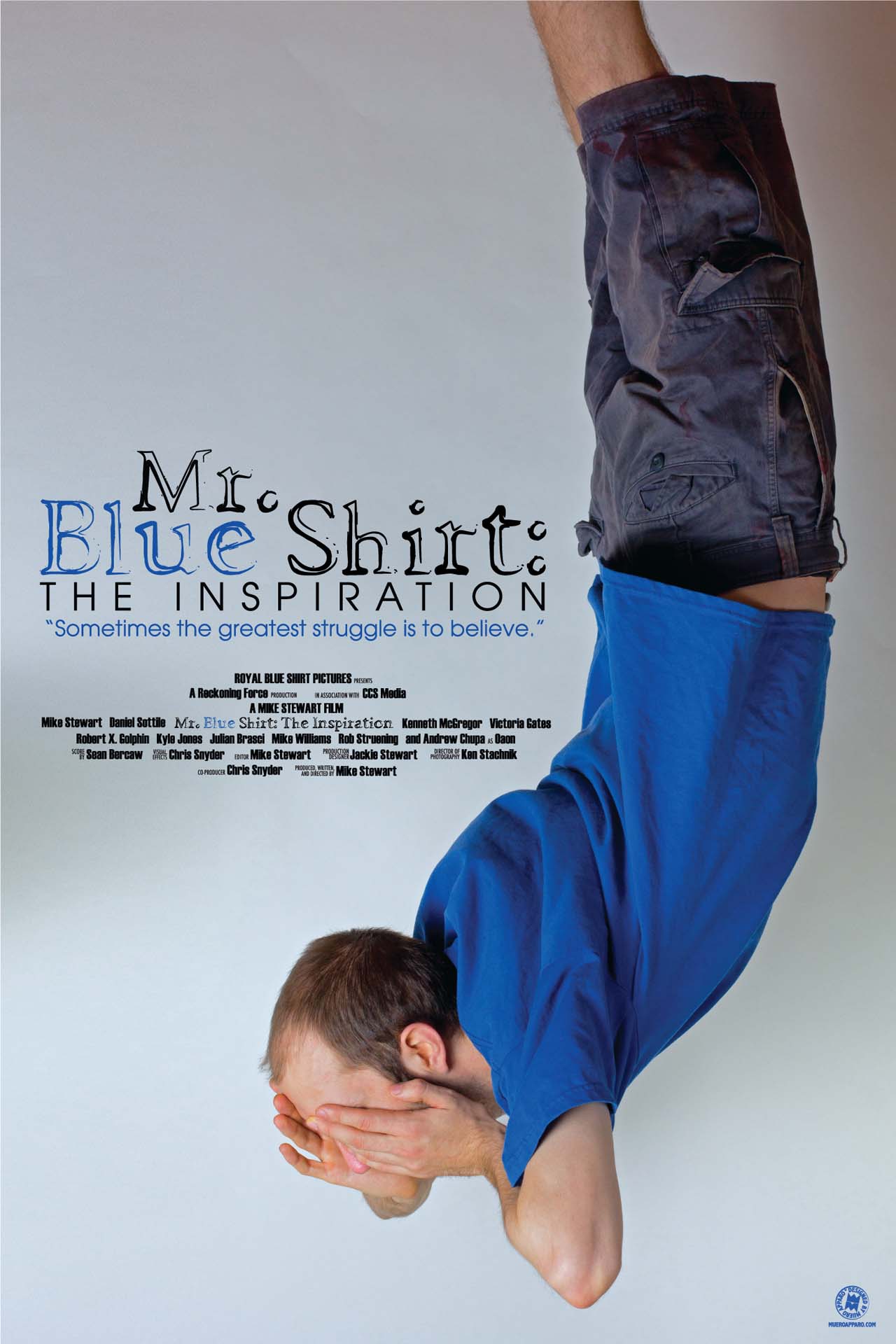 
Mr. Blue Shirt is the inspiration of many classic films mixed with bizarre ideas and also mixed with prominent themes and figures throughout the history of our planet. While fact and truth are present in some spots; things can become in depth as magic and the unknown are indeed present themes as well. Mr. Blue Shirt: The Inspiration's earliest roots stem from as early as 2006 when director/producer Mike Stewart first started writing down some key concepts and character outlines. This was then followed by two home-made test films, which were a little bit up there for their "weight class" at the time by an arsenal of different friends playing different roles and a friend that Mike met from Kutztown University who was trying to learn and master Adobe After Effects. In 2010, the monster that would be known as Mr. Blue Shirt was being ready to kick off soon and in 2012 the first recordings took place. So what kind of a movie is this anyway?? Well, if any one genre was represented by a certain snack found inside a party-mix snack bag; you would have the genre that is known as party-mix. which means all the genres are used in the story of the movie. In short, very hybrid, but perhaps sci-fi has the strongest feel. With too many actors and locations to even count and a production that has taken over three years just to shoot; this is by no means a normal independent feature. "They say less is more, but not all the famous sayings of advice can be true at all times, so with this movie we give you the opposite of that famous teaching: the entire library and the kitchen sink," says director/producer Mike Stewart. Behind the masks and the antics of the zombies, aliens, cowboys, dictators, puppets, messiahs, thugs, etc is a great teaching of philosophy and a higher understanding of the great unknown and what it is like to be a human on Earth in this universe.


Eracles is a god from a far away galaxy who is a member of the Great God Council. When he learns he is no longer a member of the council, he becomes highly corrupt and out of his mind. He finds a mysterious writing pen, which gives him powers that he only ever could have dreamed of before in the past. He is now known as The Story-Teller and writes this odd story called "The Adventures of Ogidni," where the hero, Mr. Blue Shirt has battles with treacherous foes such as his main nemesis, Porobolo. The characters then magically leave the story and become born into reality and come to Earth. The magic realm side of Earth hears of this invasion of well-being thus causing a great war of the wise, the magic, and the wit!!! 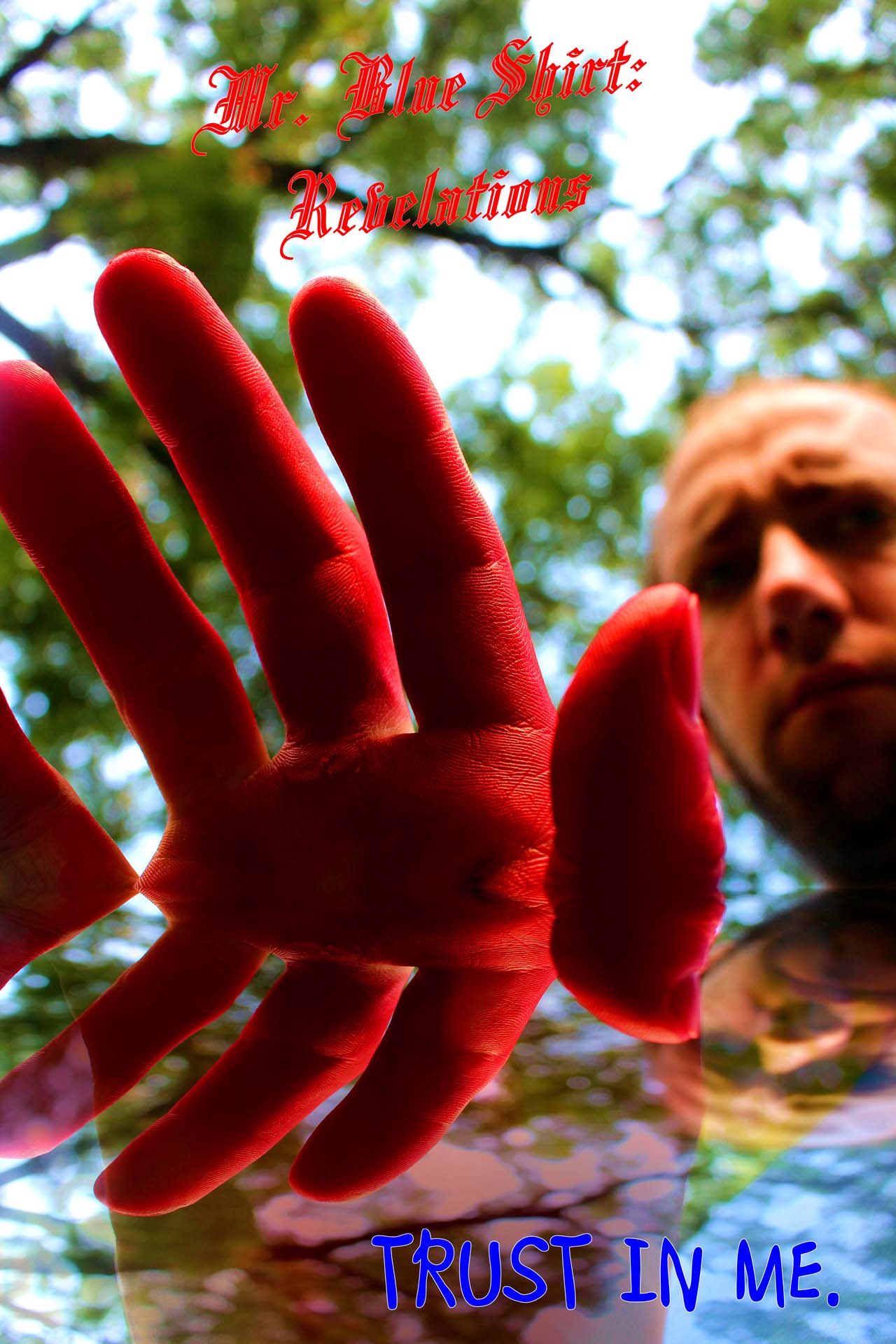 
This was normally never suppose to be as Mr. Blue Shirt: The Inspiration was going to creep into the ball-park of a three hour movie!! This would be no good for a plethora of reasons, so the film was broken into two separate movies, hence this movie was then born!! In other words, history will say these movies are being filmed simultaneously, which is obviously true.


Mr. Blue Shirt in a continuation of his quest to save the universe from the dangers of The Story-Teller and his evil empire. This one is less origin; and bigger and bolder. Not to say less origin story is a good thing, but that is just the way it is you would imagine with this being the second movie of the series. There is more horror in this one for sure.